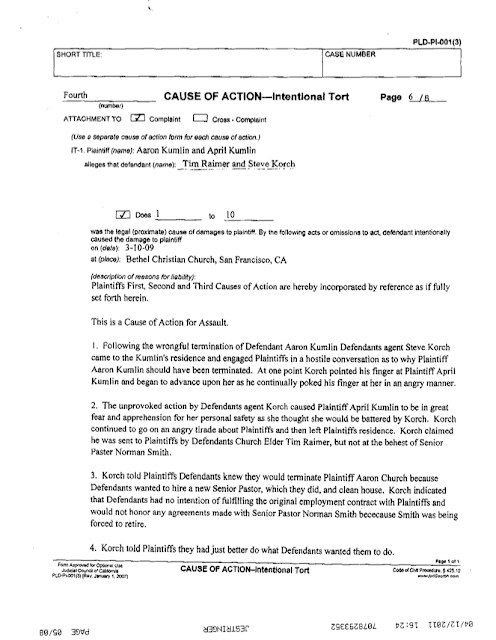 Steve Korch has a "hostile conversation" with Aaron Kumlin and his wife April.  Steve Korch "advanced upon her as he continually poked his finger at her in an angry manner."  Causing "great fear and apprehension for her personal safety as she thought she would be battered by Korch.  Korch continued to go on an angry tirade..."

Korch was used as a "strong man" against the Kumlin's, "Korch indicated that Defendants had no intention of fulfilling the original employment contract with Plaintiffs (Aaron and April Kumlin) and would not honor any agreements made with Senior Pastor Norman Smith because  Smith was being forced to retire.  Korch told Plaintiffs they had just better do what Defendants wanted them to do."

Steve Korch and his co-defendants were unable to set aside the  dismissal and was forced to answer the complaint.  See Document No. 75 for the order and dated Oct. 5, 2011.